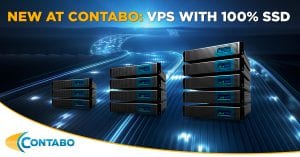 For more than a year, our VPS feature SSD-Boost by default and thus offer you the best from two worlds: A lot of storage space and an incredibly fast read-write rate of your data. No surprise here – all host systems from our existing VPS-fleet include both standard HDDs and SSDs, which provide additional cache for your data and speed-up your system.

From now on, we offer you a second VPS-series which is available in addition to our existing VPS set of the product series “HDD + SSD-Boost”. Its name? Is what you get: 100% SSD.

If you decide to go with our VPS of the series “100% SSD”, then you will get the best possible read-write speed of your data. We have equipped them with the latest and fastest Solid State Drives (SSDs) and completely abandoned traditional hard-disks. As a result, the I/O performance of your virtual server is increased multiple times. You get the maximum read-write rates – without compromise.

A lot of disk-space with SSD-Boost or 100% SSD performance: At Contabo, the decision is up to you!

You can find these and all of our existing VPS of the series “HDD+SSD-boost” right here!

Tags:ssd ssd boost VPS VPS SSD VPS with SSD
Like what you read?